LED is an acronym for Light Emitting Diode – a special type of semiconductor that was initially used to replace standard lamps in early electronic equipment,

later progressing to consumer electronics in the form of VCR and calculator displays. With the advance of technology, LED can be used as a light source with a

general life expectancy of 50,000 hours or even 100,000 hours. In addition, LED features the advantages of energy saving and environmental protection, small

size and long lifespan, and can be applied in harsh environments. 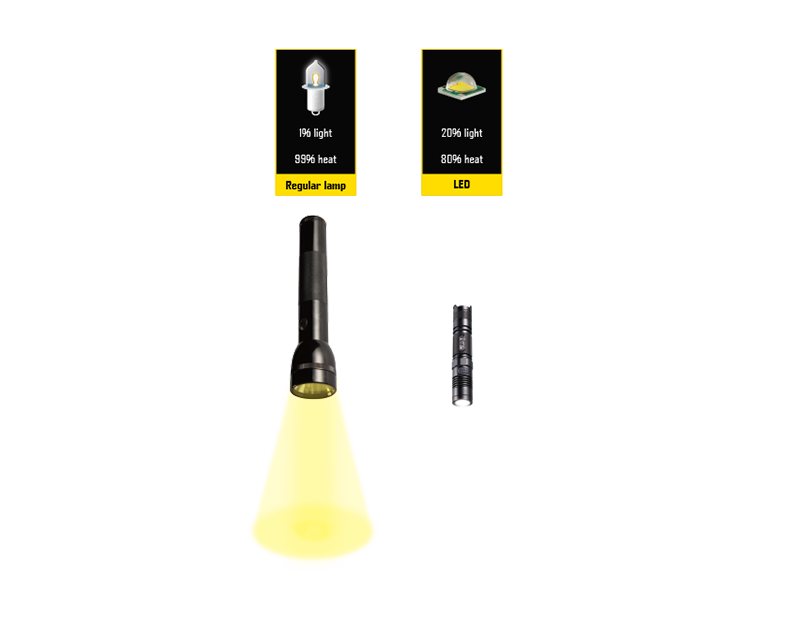 Conventional incandescent technology is based on electron’s travel through a tungsten filament, causing the filament to generate temperatures up to 2,500 degree Celsius, with light energy merely a byproduct of this process. Due to this inherently inefficient mechanism, incandescent bulbs rapidly deteriorate and burn out after about 1,000 hours of use. LEDs, on the other hand, operate on an entirely different principle.While they do require specialized components to achieve maximum brightness, a working lifespan up to 50,000 hours is possible, with a gradual fading of brightness rather than instant burn-out.

Due to the absence of a delicate filament and thin glass bulb, LEDs can withstand shock and vibration far stronger than incandescent lamps, making them ideal for rugged and demanding applications.

An incandescent bulb generally takes about 100-300 milliseconds to illuminate once activated, while an LED needs only a few nanoseconds, giving it a significant advantage in highly demanding applications.